You and your date might have got on like a house on fire, and a second meeting may happily seem to be on the cards. However, there’s still a difficult and nervous part to come: yes, that goodnight kiss at the door can still provoke butterflies in anyone’s stomach. Still, if you need an extra shot of confidence before going in for a smooch, then take your cue from the animals below, who aren’t shy about getting amorous – whether the situation calls for a peck on the cheek or a full-on kiss on the lips. 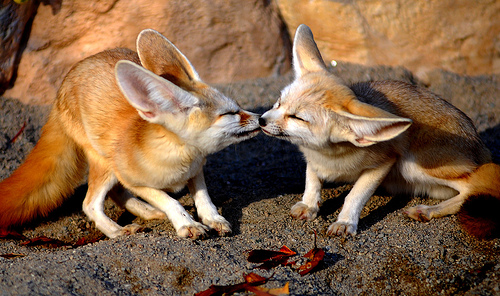 Check out the ears on these fennec foxes! These animals hail from North Africa and are specially adapted to deal with the scorching weather there. And it looks as if things are hotting up for this pair as they exchange what appears to be a tender kiss. Incredibly, fennec foxes have been recorded mating for as long as an incredible two hours and 45 minutes. It’s enough to make one feel quite inadequate. 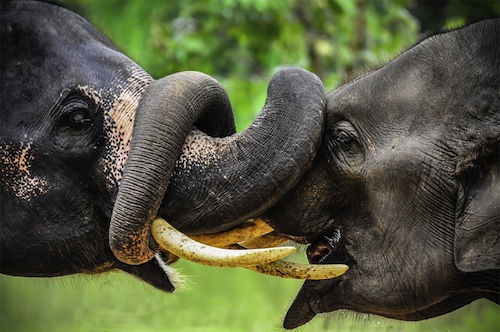 Given their long trunks and pointed tusks, kissing for elephants may be more logistically difficult than it is for most animals, but this pair has found a technique – and the way their trunks intertwine during the embrace makes it really rather sweet. Jonathan Paulson took the photo of the duo while in Thailand, and as he points out, you can just about see that the elephant on the right is sneaking its trunk towards the other’s mouth. Interestingly, elephants entwine their trunks around one another as a sign of pleasure or fondness, in the same way that people cuddle or shake hands. 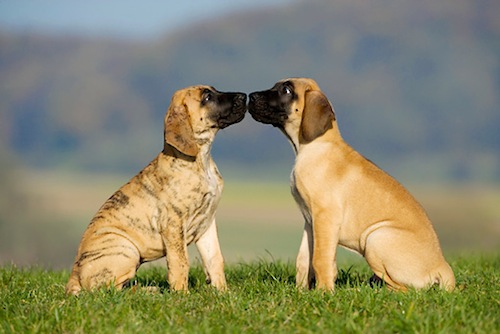 Here, two Great Dane puppies are sharing what looks like a kiss, although the one on the right appears a little surprised by the situation. When meeting each other, dogs will touch noses to say “hi.” And this also serves a different purpose: they’re having a good sniff to see if the other hound has eaten anything tasty of late. You never know, there might still be some tasty treats lying around. Amazingly, some dogs have even been placed in kissing booths, with patrons paying a dollar to pucker up with one of the pooches. 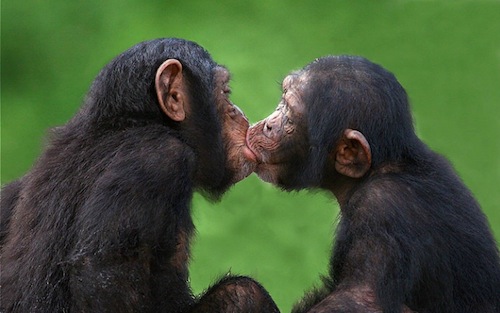 Richard Fortune picked exactly the right moment to capture these two chimpanzees at Miami-Dade Zoological Park and Gardens smooching on camera – and we think the resulting snap is rather charming. However, research suggests that things might not have been quite so cordial between the pair a few minutes before this photo was taken. According to Frans de Waal, the C. H. Candler Professor of Primate Behavior at Atlanta’s Emory University, chimpanzees often embrace to reconcile after a fight – literally kissing and making up. 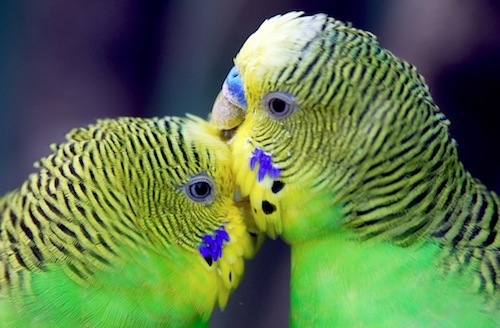 If the brightly colored budgie in the left of the picture needed some care and attention, we’re sure the tender kiss its companion looks to be planting on its head will make it feel a little better. Actually, the image could perhaps better be read as the bird on the right preening the other – although, as this is said to be a sign of devotion, the gesture is pretty cute whatever its intention. This sweet couple were discovered at the Everland Resort theme park in South Korea. 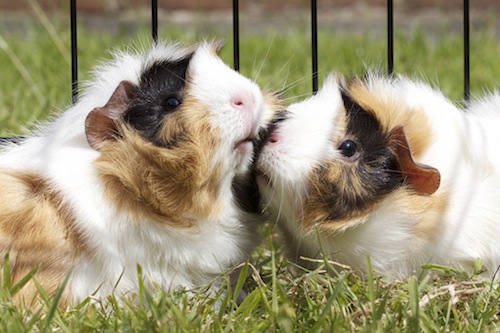 Flickr user Lawrie posted this adorable picture of fluffy guinea pigs Buster and Lilly-Rose getting cosy with each other. Guinea pigs like to get in close to sniff one another’s mouths with the aim of helping to familiarize themselves with each other. They are also known to lick other guinea pigs or even their owners; this is potentially for grooming purposes, but in the case of humans, they are probably simply lapping up some tasty salt on our skin rather than showing love. Ah, well. 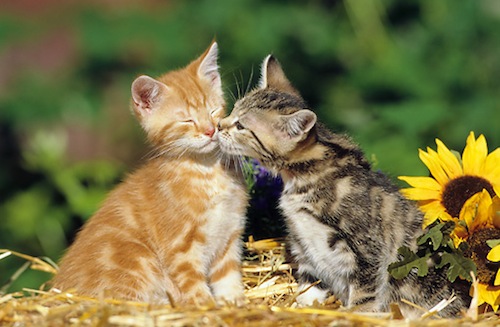 Kittens are usually pretty cute even when they’re not puckering up, but this image of one European shorthair leaning in to kitty-kiss another really has the “awww” factor. This breed of cat – which initially came from Sweden – is also known as the Celtic shorthair, and individuals are said to be smart and fun loving as well as potentially very affectionate. European shorthairs don’t always show such kindness to other creatures, however, as they can be extremely good at catching mice. 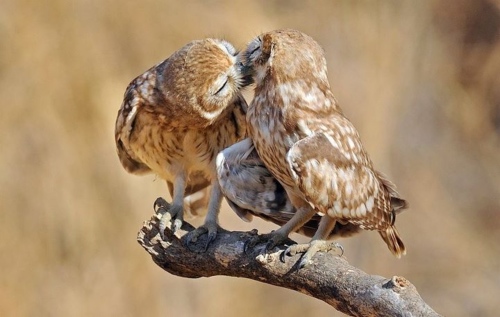 A peck on the cheek? Owls are often monogamous, so we like to think that the adorable pair above will have long and happy lives together. However, as Cynthia Berger states in her book Owls, some species can and do stray from their long-term relationships. DNA paternity tests have shown that certain birds previously considered to be faithful may in fact have chicks with birds other than their mates. 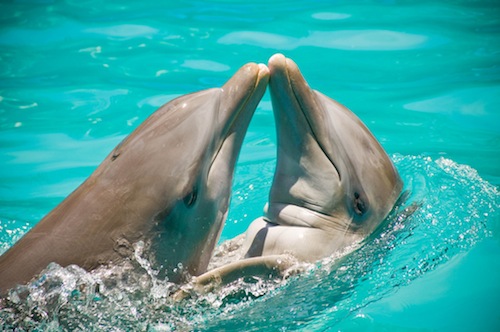 This charming scene was caught on camera by Chad Case, who spotted these bottlenose dolphins at Manati Park Punta Cana in the Dominican Republic. While common bottlenose dolphins are a frequent sight at aquariums around the world, in the wild they can be found in tropical and temperate waters. Like humans, dolphins are said to be sociable and tactile, and they display their friendship by stroking one another using their pectoral fins. 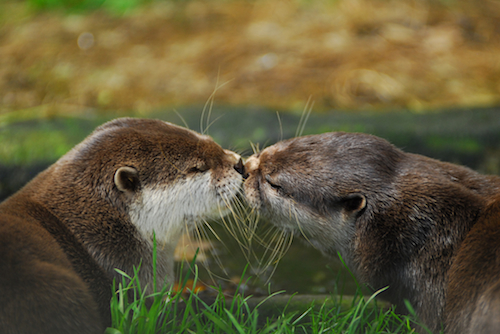 This pair of cute otters were snapped at Dartmoor Zoological Park in the U.K. As well as looking rather awesome, the long whiskers on their faces are very sensitive. Known as vibrissae, they help the animals find prey when traveling through muddy rivers with poor visibility. These two seem to be giving each other a kiss, but considering the fact that their preferred food is fish, we can’t imagine their breath smells particularly nice. 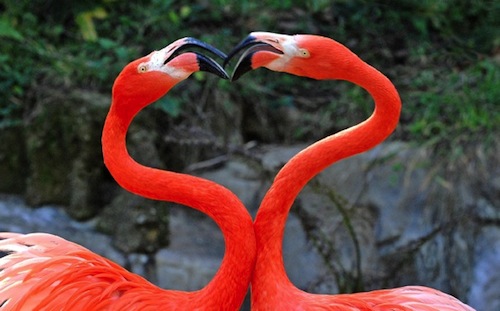 We think it’s very appropriate – and very endearing – that these two stunningly colored flamingos are making a sort of heart shape while they embrace. Of course, as well as using their bills to “smooch,” flamingos also need them to feed themselves and their young. Interestingly, to give nourishment to their chicks, flamingos regurgitate a type of milk that comes from the top of their digestive tract. And if you think that sounds disgusting, then you might be surprised to learn that some anthropologists believe that human kissing originated in a similar manner, through mothers feeding infants with chewed-up food in a behavior called “kiss feeding.” 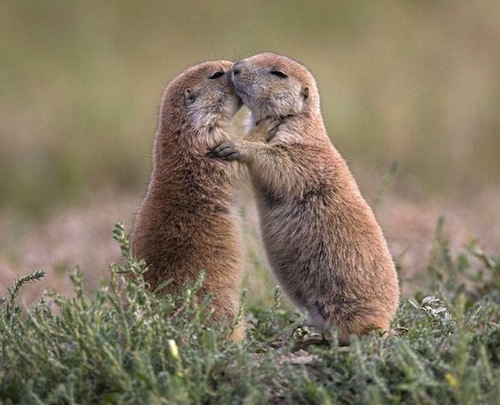 It looks like the North Dakotan prairie dogs in this picture are greeting each other after a long day’s feeding and burrowing with a quick hug and a peck on the cheek. Much like humans, prairie dogs show their affection towards members of their own family by kissing, although they don’t exhibit this behavior with others of their species outside of the domestic unit. The way in which the prairie dogs live may also seem familiar, as they organize themselves into “towns,” which might include as many as 26 families and can cover hundreds of acres. 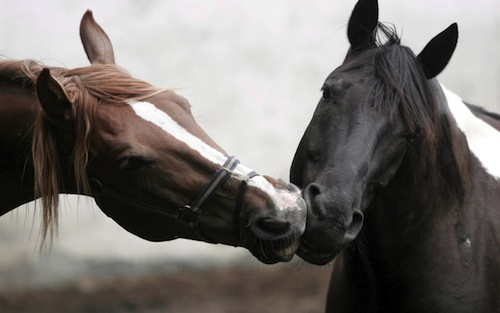 Depending on the situation, kissing in humans can be an expression of love or passion or simply a greeting between two friends. In the equine world, though, when horses reach in for what looks like a kiss, things may not end so happily. One horse owner has recounted how they have seen two of the animals seemingly nuzzling – then within moments jumping apart and aiming blows at each other. This behavior may suggest that, instead of trying to instigate any romance, horses actually get in close to size one another up. 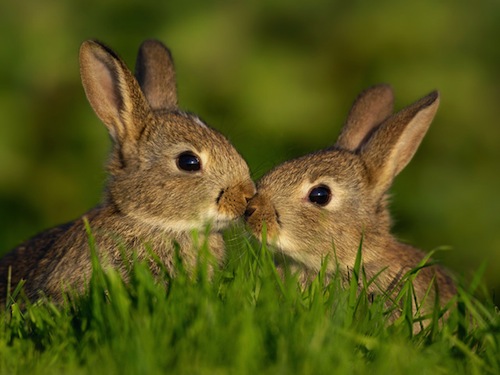 Rabbits may be notorious for their profuse breeding, but they actually take their time in forging a romantic attachment. Just like us humans, they need to get to know and trust each other beforehand, and this is done through a courtship or “dating” process called “bonding.” Pet rabbits with mates are also said to be happier and less bored than their partnerless counterparts as well as being less prone to causing mischief – although bad habits can still be passed on from one rabbit to the next. 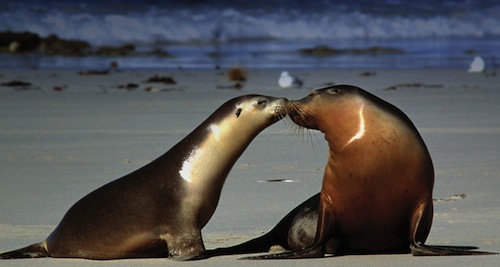 These sleek animals are South American fur seals, and romantic scenes like this one may be found on the coasts of Argentina, Peru and Chile, where the marine mammals go to breed. For humans, however, kissing hasn’t always had such affectionate connotations. In medieval Europe, a kiss could act as a display of reverence and rank, although Kristoffer Nyrop, author of The Kiss and its History, has said that the so-called “kiss of respect” can be dated back much further than that, to “the remotest times” of human history.