There's nothing quite as romantic as spilling your heart out to a loved one in written form, and for as long as humans have been able to write, love letters have been sent back and forth all over the world. There's also nothing quite like reading other people's heartfelt messages, so we decided to gather a few for you to read, ranging from romantic through to sad, funny to unique...

May the Force be with You

It's unfortunate that this next love letter was almost definitely never actually sent to a girl named Jessica, or any girl for that matter, as it's a beautifully conceived plea from a geek of (nearly) the highest order. If it weren't for the mix up between Luke and Han's Tauntauns it would be perfect.

You’ve asked me to stop writing these letters. You’ve told me they will never change things between us. But I can’t, Jessica. I can’t just… let you go. Even Darth Vader, an evil Sith lord, couldn’t leave his son to die at the end of “Return of the Jedi”.

You make me feel so safe, Jessica. So warm. I want to crawl up inside you. Like Luke Skywalker crawled up inside his tauntaun to protect himself from the sub-zero temperatures of Hoth, where the Rebel Alliance was hiding from the Galactic Empire.

For you, Jessica, I would dive into the Sarlacc Pit of Tatooine (Luke's home planet) and be slowly digested for a thousand years, like the bounty hunter Bobba Fett. (Even though in the Expanded Universe of the "Star Wars" novels, Fett eventually escapes, which creator George Lucas has accepted as official S-Dub cannon. But my simile still stands.)

Then again, maybe you're right. Maybe we're from different galaxies, far far away from one another. Maybe you're "not the droid" I'm looking for, and I should give up and "move along"...with my heart.

May the Force be with You,

This incredible and inventive love letter, written approximately 100yrs ago, was sent by William Weightman to a lady he had seemingly been admiring for some time. Rather than send a normal letter indicating his intentions, William decided to draw pictures to form some of the text. For example, the word 'Dearest' is formed using a small picture of a dear followed by 'est'. Try and work out the message before reading the transcipt. 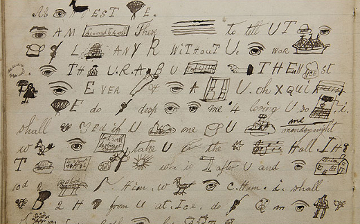 I am writing these few lines to tell you that I cannot live any longer without you. I worship you always. I think you are a beauty and the nicest girl I ever saw and I adore you. Oh exquisite Fanny, do not despise me for loving you so well. I shall be broken-hearted if you desert me. Can you meet me on Monday night, when I will take you to the Star Music Hall. I hate that Bill Robinson, who is hanging after you and I intend to horsewhip him when I see him. I shall be delighted to hear from you at once. Do not let my suit be fruitless. Reply by next post to

Thanks For Sleeping With Me

Should you thank someone for that? It all seems slightly desperate, to the point where it transforms all that was written before it. 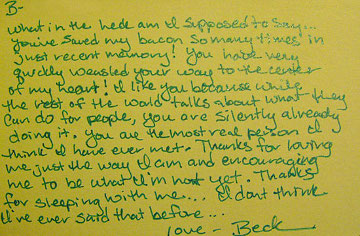 What in the heck am I supposed to say...

You've saved my bacon so many times in just recent memory! You have very quickly weasled your way to the center of my heart! I like you because while the rest of the world talks about what they can do for people, you are silently already doing it. You are the most real person I think I have ever met. Thanks for loving me just the way I am and encouraging me to be what I'm not yet. Thanks for sleeping with me... I don't think I've ever said that before...

This letter was written by legendary Mexican artist Frida Kahlo, on the back of an envelope used to hold jewellery whilst staying in hospital. The letter was meant for her husband Diego and was sealed by Frida with a lipstick covered kiss.

Remember that once you finish the fresco we will be together forever once and for all, without arguments or anything, only to love one another.

Behave yourself and do everything that Emmy Lou tells you.

I adore you more than ever. Your girl, Frida

Teach me what to do

It's hard to confirm whether the following letter is genuine but, as an optimist, I'm going to believe that it is. It was apparently found by a reader of Found Magazine back in 2003, sitting next to a computer in a school library. It's one of the sweetest letters you'll ever read, and incredibly honest to boot. 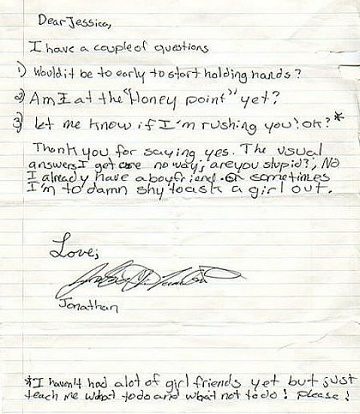 I have a couple of questions

1) Would it be to early to start holding hands?

Thank you for saying yes. The usual answers I get are no way; are you stupid?; NO I already have a boyfriend. Or sometimes I'm to damn shy to ask a girl out.

*I haven't had a lot of girlfriends yet but just teach me what to do and what not to do! Please!

You make me feel secure

Apparently there's a bulletin board within the Mozilla offices which is covered in letters from fans of the company's products. A particularly amusing example is this message from Chris Beckman, a Mozilla devotee who jumps straight in with 'I love you' and continues to gush from then on.

I love you. This letter is an assingment for our health class. We needed to write a letter to someone who has made an impact on your life. You have, from speeding up my connection, making me feel more secure, or just freeing me from Microsoft. I love Firefox and Thunderbird, but I don't like your naming of FF3 beta, Minefield. Pfft... What kind of name is that? It doesn't fit. Thank you for your programs and the continued development of them.

Discovered by Thomas Pafford whilst taking his dog for a walk, this sad and eloquent love poem is actually written on the back of a restaurant's wine menu. 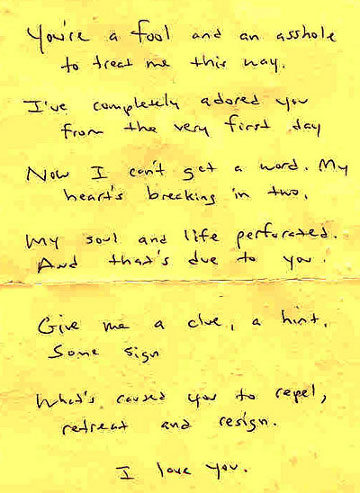 You're a fool and an asshole to treat me this way,

I've completely adored you from the very first day,

Now I can't get a word. My heart's breaking in two,

My soul and life perforated. And that's due to you,

What's caused you to repel, retreat and resign.