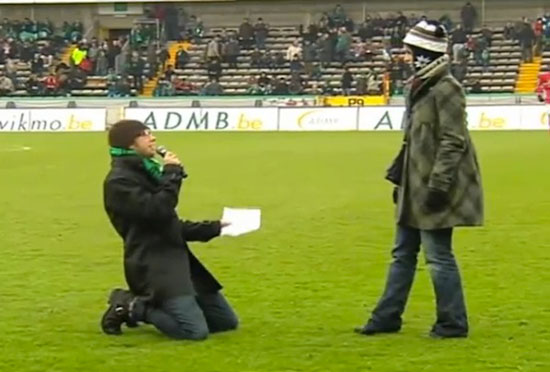 Whether you've met your other half through online dating, at work or having your eyes lock in a crowded room, there's nothing more heartfelt than a marriage proposal that goes smoothly and romantically. Sadly, there's also nothing more crushingly embarrassing than a proposal that crashes and burns, particularly in public. We list 10 lovers who popped the question when the time and place weren't right - and suffered the dire consequences. 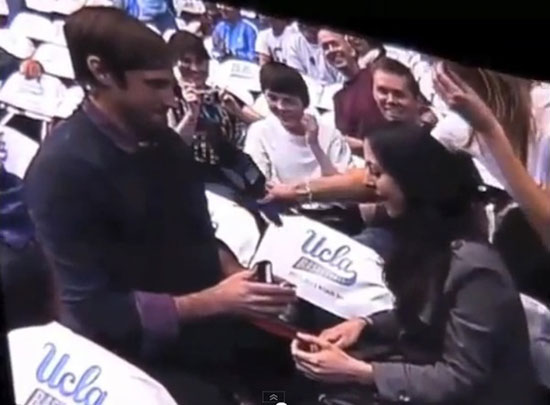 Christmas may be a time for sharing, but sometimes there are feelings that it's best just to bury under a snowdrift. This man found himself on the festive JumboTron with his girlfriend at a UCLA basketball game, and decided the moment was right to pop the question. Turns out it was anything but...

His beloved fled in embarrassment (or worse), despite cheers of encouragement from the crowd. Reports that the proposal may have been staged were denied by UCLA: apparently the cringe-worthy event was completely for real. Maybe she was just camera shy. He, however, just feels like a chump. 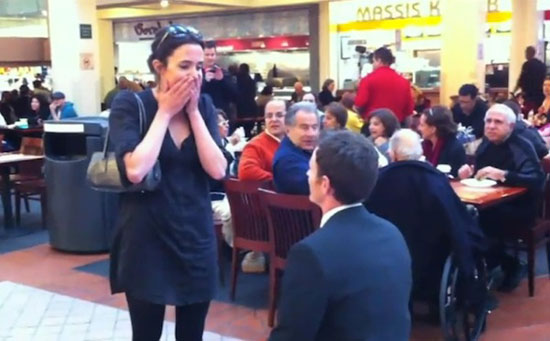 There are many romantic places where a hopeful boyfriend can propose: anywhere in Paris, for instance, a gondola in Venice, or even at home while Barry White croons in the background... Unfortunately, the food court at the local mall isn't one of these locations...

And while this would-be groom remembered to wear his best suit (and even got some dude in to play the guitar) he managed to overlook this crucial fact - resulting in a humiliating rejection from his "Sweet Caroline" in front of a large crowd. Perhaps he might still have managed to win her over if he hadn't kept babbling about cupcakes. 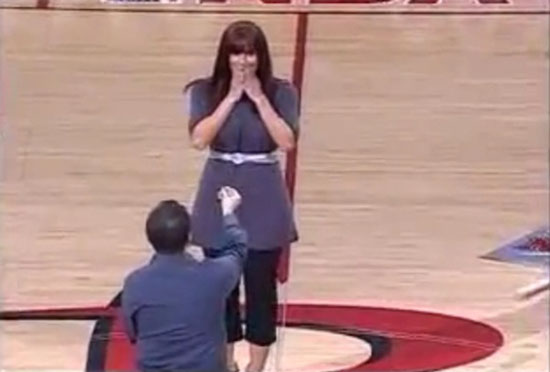 Producing an engagement ring at a basketball game definitely seems to be a bad idea. Another unfortunate wannabe groom tried to propose to his girlfriend at a 2008 Houston Rockets game, and just to make it doubly humiliating, he chose to do it right in the center circle...

Even the commentators couldn't quite believe the very public rejection that followed, with both remarking that it's the only time in their twenty-plus years of broadcasting they'd seen anything like it happen. Ouch! The only bright spot in this video is the spurned guy being escorted away by a man dressed as a giant fuzzy bear (that's "Clutch" to Rockets fans). 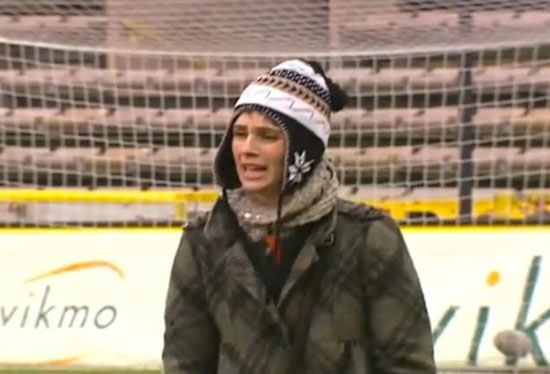 This wannabe Romeo is another man seriously out of his depth. Not only did he apparently pick the coldest day of the year to try his hand; the speech he read from a piece of paper was so unappreciated that the crowd began booing halfway through...

The prospective fiancé just looks terrified throughout, and judging from their body language, we wouldn't even guess the couple knew each other before they got to the stadium. Mind you, while it may not have been the most confident declaration of love ever, the reaction is just brutal - and you can't help but feel sorry for the guy. He should at least have tried getting to know the girl first. 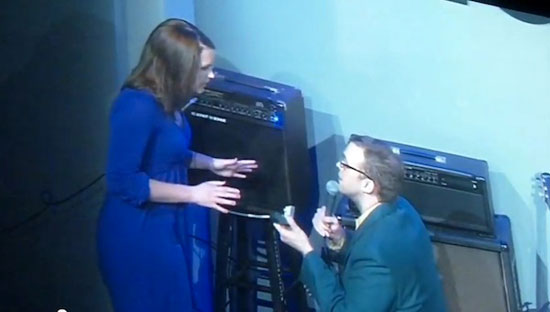 Despite it being a comedian that popped the question, this proposal at Washington D.C.'s Riot Act Theater soon took a less-than-funny turn...

The would-be romantic seems to have made the mistake of not talking to his beloved beforehand, as his grand gesture soon turns into a whispered discussion, and then, well... the term "bombing on stage" has never quite been so appropriate. The audience, who aren't even sure if this is part of the act or not, are left wondering what to do, and the stand-up wisely chooses to leave the stage early rather than struggle through an entire set of being the butt of the jokes - rather than telling them. 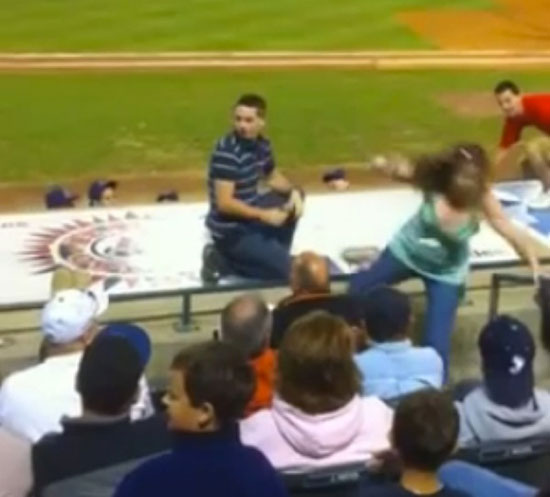 Another brave guy stepped up to the plate in front of a crowd at this Hudson Valley Renegades baseball game. The guy kept his proposal short and sweet...

Unfortunately, though, the straight-bat rejection turned out to be short and not-so-sweet - as his beloved turned him down and fled the stadium. You'd think people would have learned that a bunch of rowdy sports fans isn't the best audience for intimate moments like these. We just hope she didn't suffer too much abuse as she made her way through the crowd. 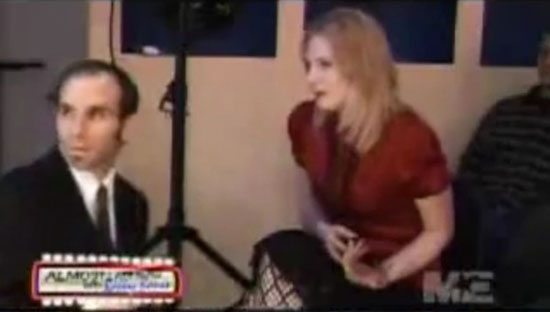 This hopeful groom made a premature proposal to his girlfriend of several months - on live television. Perhaps predictably, he ended up being rebuffed before an audience of millions...

The look on the girl's face changing from happiness, to shock, to embarrassment, and finally to pity, would make this the most awkward public proposal ever - if it weren't for some of the others on this list! It might also be less depressing if the TV presenter's hairstyle weren't so ridiculously 80s, or if the prospective fiancé hadn't apparently modeled his goatee with a sort of "hipster Satan" vibe in mind. 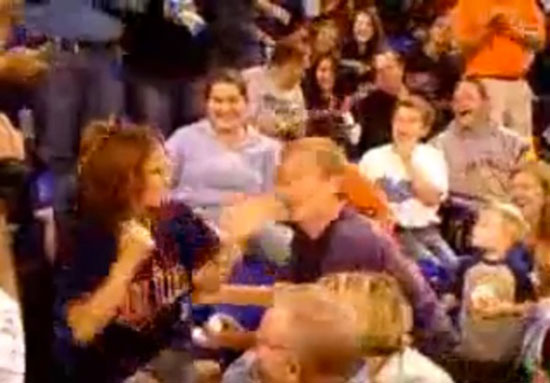 Perhaps this sports fan was emboldened by his team's winning streak and proposed to his girlfriend in the heat of the moment. What is certain, though, is that this is no win of any sort...

The first hint that something is wrong comes when the, ahem, "lucky" lady completely covers her face in what looks to be a tactic to shun the camera. The second, not-so-subtle hint occurs when she slaps her other half in the face and walks out of the arena. This clip proves not only that is romance dead, but that it's going to end up in hell and then be reincarnated as Bud Bundy from Married with Children. 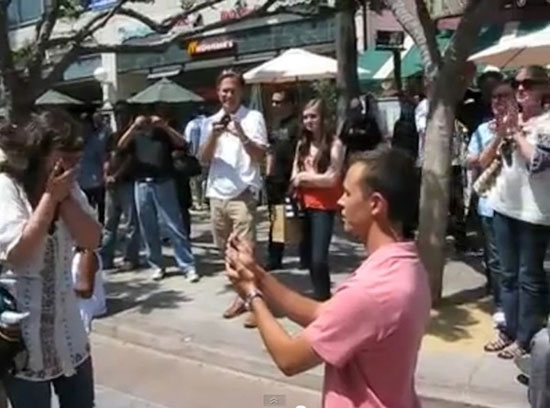 Unless she happens to cry tears of joy, weeping generally isn't the reaction you want from the girl to whom you're proposing. Unfortunately, the poor chump in this video barely gets the first words out before his girlfriend starts blubbing...

Even the support of a large crowd of spectators (or are they her family and friends?) wasn't enough to make her change her mind. In fact, if anything we think the embarrassment just made the poor girl run faster. Should have tried online dating instead! 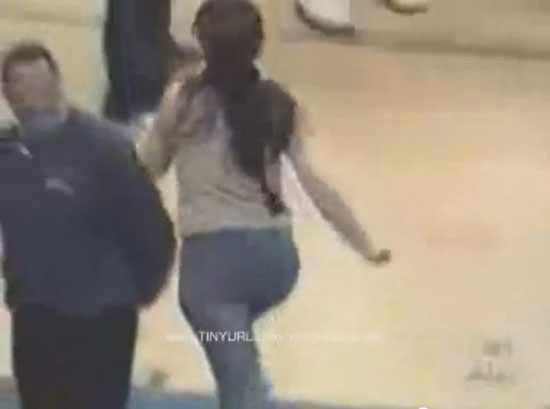 Hosted by the Washington Wizards, this failed proposal even made the news. An amorous basketball fan decided to get his blindfolded girlfriend into the middle of the arena by making her think she had simply won a competition, then surprised her by appearing and popping the question...

Sadly, after bursting out of his costume, he barely even got the words out before his beloved fled the scene. After keeping his other half in the dark like that, the engagement ring was definitely not money well spent.

This article was written by Julian, a blogger from London. The views expressed in it are his and do not necessarily match those of Free Dating.co.uk.